The Seven Seals: A Hand of Adonai Novel (Book 3)

Since she woke up in Alrujah, a digital world of her design, Lauren Knowles has been fighting for her life. And now, just when things seemed the most bleak, her best friend Oliver has vanished. Together with her sister Bailey Renee, Lauren must embark on another perilous journey to defend herself and save her friends. But the task is not easy, and the seals between the worlds weaken. When Aiden and Lauren find themselves back home, they must make a life-changing decision: stay where it’s safe or return to Alrujah to protect the people from evil and hope to bring their other friends home. Erica, too, finds herself back in North Chester, a terrifying prospect for her, and face to face with the father who burned her hands. All Alrujah darkens under the shadows of three terrifying abominations, all of which must be defeated if the teens ever want to get back home for good. But can they handle the Abominations when the Hand is scattered?

The Shadow Assassin: A Hand of Adonai Novella (Book 2.5)

Shadow Singer is as beautiful as she is mysterious and savage. Despite her assurances that she means Oliver Shaw no harm, he has his doubts. After all, she did knock him out and kidnap him, taking him away from friends who desperately needed his help.

But when she takes him back to her home world of Myrassa, Oliver realizes the complications she’ll introduce to him are just the beginning. Like her, Myrassa is characterized by deep beauty and deeper savagery. With only this assassin as his guide, Oliver must navigate morally murky water and find a way to preserve his faith when confronted with incredible odds. Can he be the hero Myrassa needs, or will he lose himself in the bloody politics of a world governed by evil? And can he do it in time to return to Alrujah to defend his friends from the evils they face without him?

The Blood Sword: A Hand of Adonai Novel (Book 2)

Soon after their defeat of the abomination Belphegor, the Hand must turn their attention to the Blood Sword, an ancient, cursed blade. Securing the deadly artifact is the next step in their quest to find a way back to their home in North Chester. But the task is far from easy. Erica soon sets out with Ullwen of Varuth, a staunch ally, on a quest to find her parents, leaving the others to search for the blade on their own.

The search for the Blood Sword eventually leads the Hand to Yarborugh, the Nameless Heir, a drunken half-dwarf, and Langley of Errul, a contentious half-elf politician. Together, the group of five plumb the depths of an ancient elf military post crawling with corpses to attain the cursed blade. Meanwhile, Erica and Ullwen must find a way to infiltrate Alrujah, a city that shares the paranoia of its ailing king. As animate statues wield terrifying magic, the group faces certain death.

The Book of Things to Come: A Hand of Adonai Novel (Book 1)

Escape is only a deadly journey away.

At first, Lauren Knowles is thrilled to wake up in Alrujah, a digital fantasy world she created with her best friend, Oliver Shaw, but the exhilaration of serving as a magical princess fades when she senses a demonic force lurking in the shadows. Though they designed a world of wondrous beauty blue-leafed forests, shimmering silver rivers, and expansive medieval castles Lauren and Oliver soon find their secret realm to be an ever-changing land of dark oppression and deadly sorcery. With the help of Aiden Price and Erica Hall, two friends from their high school in North Chester, the four teens must find a way out a way that can only be discerned from the dusty pages of the ancient leather-bound tome, The Book of Things to Come. Faced with questionable allies, invisible enemies, and increasingly dangerous levels of difficulty, the four must learn to work together, to trust each other … or be forever lost.

Who is Harrison Sawyer

Lighthouse Publishing of the Carolinas (October, 2016)

Desperate to rediscover his estranged son, Marshall Sawyer agrees to finish the autobiography Harrison began before his untimely death. But the passages described in the book do not match the life Marshall remembers with his son. As he begins to investigate, he soon discovers a dangerous plot — one that puts his life in danger, and the future of America at risk.

Together with his daughter-in-law and a professional football player friend, Marshall embarks on a journey to find out the truth. What happened to the boy in the missing years between after Harrison ran away at age fifteen and his marriage years later? The answer will have ramifications that will be felt throughout the world.

Lighthouse Publishing of the Carolinas (December 23, 2013)

Ten articles in eight days is a tall order for any journalist, even for Polk Award winner Connor Reedly. But with a dying wife and an empty bank account, the promised payment of $250,000 is hard to turn down. More so, his enigmatic employer, Mason Becker, has insinuated Connor’s acceptance of the job will result in a supernatural healing of his beloved wife.

The people of Hailey, California–the subjects of Connor’s charged articles–are a secretive group, not willing to open up to strangers. When shots are fired and Connor is running for his life, he demands Mason answer his questions: Why are the articles so important? Is anyone going to publish them? Where is the money coming from? How can he be so confident that the completion of the articles will heal his wife?

Nothing in Connor s vast journalistic adventures–not Katrina, not September 11th, not even his first-hand experience in the genocide in Darfur–could prepare him for the answers Mason gives. Now, it seems, the life of everyone in Hailey including his wife’s is in his hands.

Faced with the impending death of his best friend, Geoff Morris wonders if there is life beyond rock and roll. Through the highs and lows of his band, his dead-end job, his frustration with his lack of direction and inspiration, he rediscovers an old friend from college. Emily Amherst is grateful for Geoff’s assistance in recovering from a personal disaster and rewards him by awakening a passion that has lain dormant within him since he moved to LA, away from family and friends, to pursue his career as a rock superstar. But is their budding relationship enough to weather the trials of an internet romance and continual, unceasing personal tragedy?

Heart’s Song is love letters in the modern age via email, text, and video chat with some live action in between. Rock and Roll meets conservative grace. A mix of wonderfully crafted words and deep layers of real life truths. Geoff and Emily will live in the reader’s heart long after they read the last line.—Cindy Ervin Huff, blogger, reviewer and author of Secrets and Charades

Rock and roll romance is more than a subtitle: it’s the perfect metaphor for Heart’s Song, a story about the great love two people can find when they start to actually listen to each other’s dreams. Heart’s Song is told through their modern-day letters to one another. These epistles are the heart of this story–a true, honest look at how love develops and perseveres through the hardest times. –Lindsey Brackett, author of Still Waters. 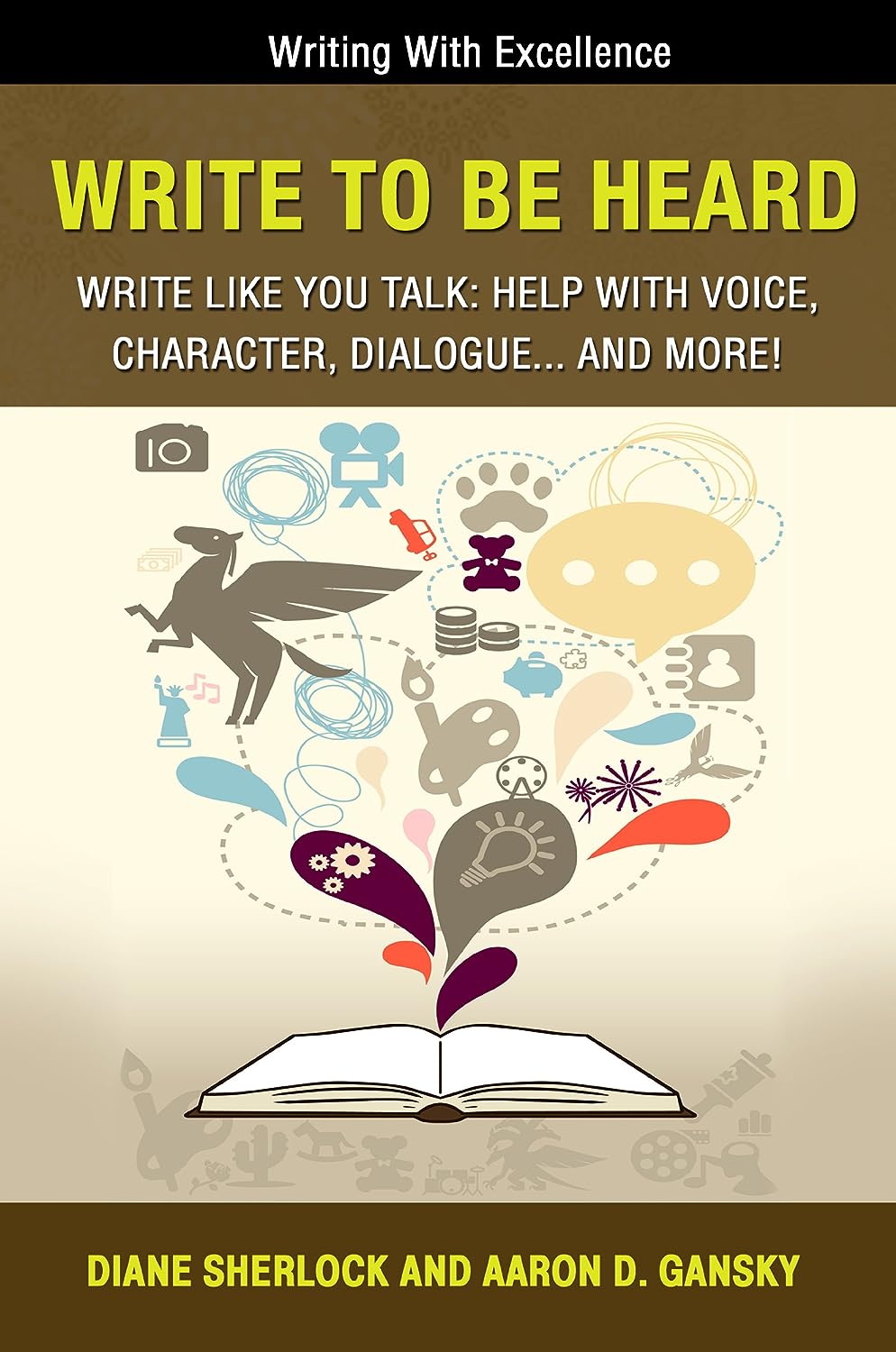 Write To Be Heard

Lighthouse Publishing of the Carolinas (April 2, 2013)

Learning one skill will improve everything you write. Ready? Here it is:

Write like you talk. That’s it? Yes, that’s it. But it’s not as easy as it sounds. It’s a skill and like any skill, it can be learned and with some practice, you can master it. What’s in it for me, you ask? First, writing will be easier, less of a chore. Instead of fighting the page, you will sound like you. You might even find you really like to write. Who knows. You might have a story inside you that other people really need to read.

Topics include tips on:

Lighthouse Publishing of the Carolinas (September 18, 2012)

Admit it: you’ve gone to your local book store, picked up a book, and skimmed the opening page.

Don’t be ashamed. You’re not alone.

Now, as a writer, ask yourself this: if a casual consumer picked up your story, your novel, what would they think of your first line? Scary thought? If you’re a writer, chances are you’ve been stuck on how to craft an opening line. This book can help. Analyzing some of the greatest first lines in fiction can help us find the techniques the masters used in creating some of the most enduring lines in literature. But more than just a simple analysis, this book will show you how to compress things like character, conflict, voice, and setting into a line that will embody an entire work, and immediately establish your authority as a writer. After reading this book, you’ll have the confidence and tools to craft a first line that will make editors and casual consumers stand up and take notice.

And regardless of the words you choose to use, your first lines will say, very loudly, very proudly, “This is a book you have to read.”

An Affair to Forget

Lighthouse Publishing of the Carolinas (August 8, 2011)

The Sin of Adultery Gives Birth to a Blessing that Saves a Soldier’s Marriage (Gansky Shorts) Lighthouse Publishing of the Carolinas (August 8, 2011)For fifteen years, Caleb hid his affair from his wife. She was far too fragile to handle the news well. But now that his mistress has passed on, he must bring his 14 year old daughter home. Caught between responsibility and fear, Caleb must find a way to break the news to his wife without it killing her.